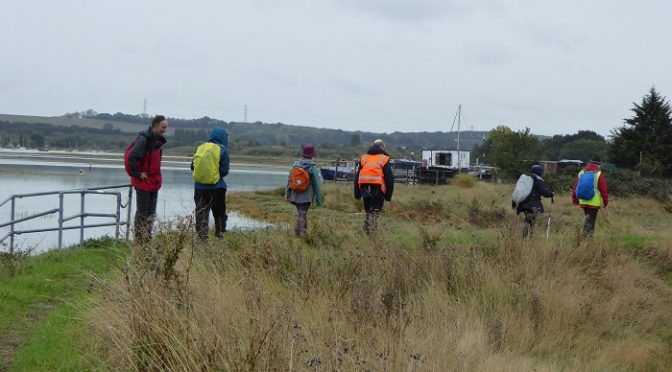 .Well a day of ups & downs especially by the leader.We set off from Rainham, Kent station at 10.36 and within the first two miles the leader was to be found sprawled on his back on the muddy ground. His fall from grace having been cushioned by the First Aid kit stowed in his rucksack. We passed near to Upchurch, here Sir Francis Drake grew up his father was Rector of St Mary’s church.The morning was dry despite heavy overnight rain and hardly a breath of wind. With three dogs barking and challenging us as we passed a stables.We had during the course of the day to walk four times along a very narrow & busy road, the same road.Geoffrey after consultation agreed to walk at the back in a High-vis jacket, with the leader in his at the front.

We had views over the glass flat high tide of Halstow Creek of our final destination, The Kingsferry Bridge, still one mile from our lunch stop at The Three Tuns, Lower Halstow.A family run pub dating from the 15th century, the food did not draw any complaints so it appears the four who took their lunch enjoyed it.Lower Halstow’s church, St Margaret of Antioch, built on the site of a Saxon church. The walls have Roman bricks incorporated.Sadly the rain arrived whilst we dined, not heavy but continues.
We had four recently cultivated fields to cross in the afternoon (muddy boots with a vengeance) and what I expected would be a chorus of ‘mad-dogs’ at one farm, which because of the inclement weather turned out to be one dog with a few halfhearted barks after all but one of us had passed by.We saw Emus in a paddock just prior to our one dog encounterThen followed a four miles wander over Chetney & Ferry marshes before ending at Swale Station, one platform & one track worked bi-directionally.On the edge of Chetney marsh we walked along ‘The Old Counter Wall’, built in the middle ages by monks of Christ church, Canterbury to protect their fields from the sea.We passed through and by several orchards in the course of the day. And we did it all before the light faded.
Martin

Thanks to Pam for photos