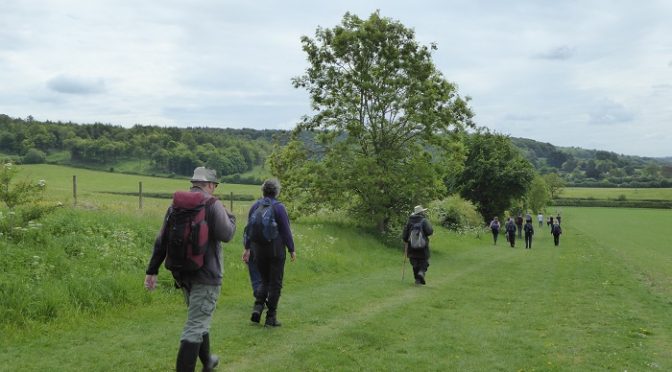 On a greyish but dry morning 8 Polys met at Marylebone station and 3 more joined them at Saunderton, having driven. We set off and encountered a few muddy sections but the weather improved as we progressed. After navigating, with a little difficulty as the path was partly water logged, through the woods on Naphill Hill common, we reached Hughendon Manor (where Disraeli had lived). Some picnicked in the pretty gardens while others partook of the home made dishes served in the cafe. Refreshed, we set off towards West Wycome. Two ramblers passed by the Hell-Fire caves, while the rest of us opted for a short rest at the Dashwood Mausoleum. We were thrilled to discover that St.Lawrence Church nearby was serving afternoon. tea. Reluctantly we drank up and left our spot in the sunshine to make the last effort to reach the station or cars. Some of us, myself included,  had to summon up some extra energy for a short sprint as we only had a few minutes to spare for the hourly train. On the way back, the general consensus was that we had done more than the advertised 9.9 miles but that it had been a very pleasant day and the tea and cake were a welcome bonus.

Thanks to Pam and Gillian for photos