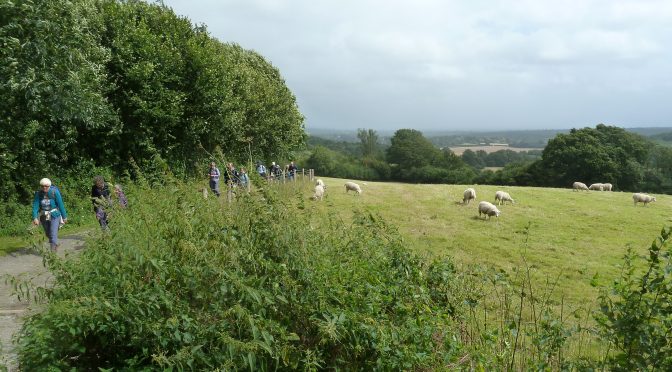 The weather forecast  was for strong winds  leading to travel disruption so it was a pretty decent turnout of 16 who assembled at Sevenoaks station. We made out way up the hill and headed for Knole Park, stopping to admire a tree carving. I had previously found the park to be closed during strong winds and my heart sank as we approached the gate  and saw a park employee fixing a sign to it.   Fortunately, it was just a warning . Knole House is one of the largest houses in the country, and surrounded by a large deer park. Skirting to the west of the house, we emerged at the attractive village of Godden Green. Climbing up through woodlands, we walked along an old track at the top of the ridge before descending to Stone Street. We passed  the Padwell Arms, scene of at least two club lunch stops, now sadly derelict. It had been drizzling intermittently but suddenly started raining heavily. It was at this point that the leader discovered he hadn’t packed a jacket but fortunately the rain was short lived. We headed south and west,  through extensive lavender field which I recall being an orchard in the past. We passed some hop pickers’s huts before having our picnic at Ightham Moat. Our afternoon route took us up  and along a ridge with good views to the south. The weather gradually improved and there was even some weak sunshine. We stopped at a well placed  bench for a rest and  were surprised and delighted when Carole produced a large container of delicious homemade buns. Many thanks Carole.

The final part of our walk was back through Knole Park and about half of us stopped for tea. Walking through the park towards the town we were rewarded by the sight of some young deer who seemed most unconcerned at our proximity.

The train  to London was slightly slow because of speed restrictions, and the weather could have been sunnier, given that it was August, but everyone seemed pleased that they had made the effort to get out.

photos by Siew Kee, Kim and me.