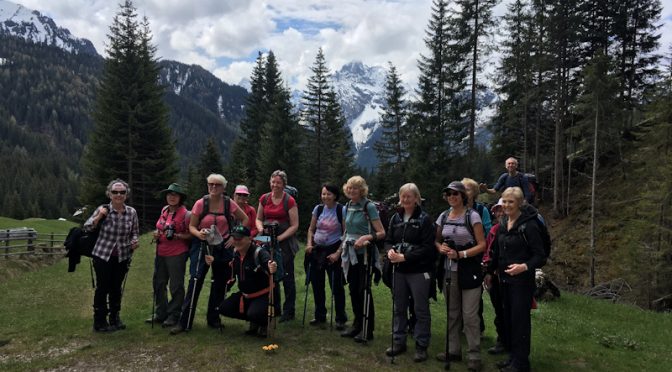 We started the day with a substantial breakfast in the Hotel Vajolet. The ever-attentive Signora dressed in local traditional dress greeted us and indicated the spread. I chose muesli, a slice of peach, yoghurt, a boiled egg, a slice of rustic bread, ham and cheese, to get me started for the first walk. I had to resist the temptation to eat croissants and cake as well or I wouldn’t have been able to make it up the mountain!

A luxurious coach took us to Pozza di Fassa, where we stopped to buy food for lunch in a small supermarket. Better informed (carnivorous) walkers got special sandwiches made by the butcher! Then to meet our jolly guide for the next three days, Luca. Fortunately he spoke enough English to talk about the impressive mountains (Gruppo del Sella and the Marmolada, the highest peak in the region) and their geology (how dolomite was named after Déodat de Dolomieu, a French geologist who was one of the first to identify the origin of the rock), some history of the region because of its proximity to Austria and the local Ladin language, the names of the many flowers which we didn’t know and to answer most of the questions we threw at him! It saved Susan having to act as translator all the time! The more questions we asked, the more time we had to recover our breath!

When we started up the mountain, I felt that my knees were like jelly and my heart and lungs were doing overtime. I put it down to the altitude. Fortunately, I gradually got used to the gradient. My explanation that I live at sea level and found it hard to acclimatise so quickly met with no sympathy whatsoever! We were going up a gravel track and pausing to look around and admire the surrounding mountains, such as “Peak Eleven” (Cima Undici) and “Peak Twelve” (“Cima Dodici”) (the hour at which the sun turns the mountain in question into a sundial). Val San Nicolo (where children go up the valley to collect presents from St. Nicholas at the beginning of December rather than on 25th). I was relieved we weren’t going to be trying to scale any of the spiky rock faces that we could see around us and, in the distance, in between the clouds.

However, at one point, where the snow on either side of the road was more abundant, Luca gave us the chance to choose “avventura” or continuing up the gravel track. Avventura meant walking over the snow, treading carefully where others in the group had trodden, or sometimes sinking up to our knees, following the meticulous signposts even though the paths were covered in snow, weaving our way between pine trees and larches, trying not to tread on little croci/crocuses or gentians, peeping out where the snow had recently melted. There was a steady drizzle but that didn’t seem to melt the snow. Eventually we arrived at 1820 metres altitude, where there was a mountain chalet, Malga di Monzoni, (closed in the low season) where the rest of the group who had continued up the gravel track had been sitting waiting for an hour. It was not the weather to take our time over our lunch, so we were soon heading off down the mountain again, as the snow was too deep for us to go any higher, which had been the original plan.

Back to the coach for a ride back, stopping off in Sen Jan di Fassa to buy some local cheese, then on to the Hotel Vajolet to warm up, dry out and have a cup of tea, before dinner in Moena! What a lovely, interesting, rewarding if tiring day!

Sunday was the best day for the weather, sometimes cloudy but a fair share of sunshine too. 18 hikers left the hotel by coach and met up with Luca in Canazei, a popular ski resort at the top of the Val di Fassa. Passing through the old town we admired the elaborately painted house of artist Giancarlo Debertol. We made our way alongside the river and the ski pistes to Pian Frataces, where we had a short rest and admired the rugged peaks of the Sella Group and the Sass Pordoi. As we walked further up we had to climb over or crawl under some fallen trees and patches of snow started appearing.

After crossing a snowy, but not too deep, meadow we arrived at our beautiful lunch stop not far from Passo Sella. Here we picnicked surrounded by the snow-capped Sella, Marmolada (the highest mountain in the Dolomites at 3,343 metres), Catinaccio and Pordoi mountains. After lunch we made our way back down, taking a detour from Pian Frataces through trees to visit an unusual waterfall. This involved crossing a bridge clearly marked ‘no pedestrians’!! As we passed some felled trees with names on them, Luca explained how the local people are entitled to the wood from a designated area of land. The waterfall had several basalt columns, similar to the Giant’s Causeway in Ireland, and some of us discussed the fascinating and varied geology of the Dolomites with Luca. On our arrival in Canazei we stopped in a bar for a drink before making our way back to Moena by coach.

This was the last day of our walking trip to the Dolomite’s.  We were greeted by our cheerful and ever optimistic guide Luca. My recollection was that he had informed us that we would have a short sharp hill at the beginning of the hike before a slightly more relaxing walk to the mountain hut owned by his friends where we would enjoy a Polenta lunch.

The reality was that the steep hill continued for some distance following the Rio Duron until we arrived at the Val Duron a beautiful mountain valley. The route up, although strenuous included some beautiful views and a chance to see a marmot who appeared happy to be photographed many times!  The threatened rain started in earnest as we neared the top of the hill and we were all relieved to reach the hut to enjoy a warm welcome by Luca’s friends. We were given the choice of a mountain of Polenta with cheese, mushrooms, sausages or goulash and beer or wine. We were also treated to a generous glass of Grappa and raised our glasses to Luca and his friends to thank them for such a great meal and such a friendly atmosphere.

We braved the steady downfall of rain to continue our walk following the wide track, via Pian, the old Campitella village. Once we reached Campitella we enjoyed a final drink with Luca who recounted some very amusing stories of his time as a mountain guide before catching the mini-bus back to Moena.

Susan had arranged for us all to have dinner at Kusk a restaurant in Moena. Some of the group who had ordered a set three course dinner began to regret having so much polenta at lunch time!
This was our last time when all of the walk group were together as some were flying back home the next day, the Chair gave a speech to thank Susan for all her hard work and patience ensuring that all arrangements went smoothly, resulting in a great walking trip.

The Strollers’ Walks by Danny

On a damp Saturday morning, nine Stollers set off for a five mile walk around Moena. First we climbed up to the hamlet of Someda and visited its attractive church. Then we headed down to the town centre where we had a predictable coffee break! Following the river we reached the Tourist Office where we stopped again. Continuing on, we crossed the river and found ourselves by a supermarket where guess what! Now carrying supplies, we took a higher path back to town for lunch. Three of our number then bailed out as the town shops were more of an attraction! In the afternoon, the sun came out and we did a lovely circular ramble back to the hotel, via Soraga.

On Sunday morning, our group was joined by three Hikers who found the previous day a bit taxing. We all took a local bus to Mazzin where we started on a five mile riverside walk back towards Moena. At Pozza Di Fazza, we stopped for lunch but couldn’t find anything open! Noise from a marquee in a side street alerted us to a gathering of athletes at a prize-giving for a run up the valley and back. They didn’t mind us joining them for beer, prosecco and cake! We then continued in a happy frame of mind back to our hotel.

On the Monday morning, two Hikers returned to the fold and took a Stroller with them. Three others pleaded ill-health so the group was reduced to six. A further two were lost after a steep climb up to the hamlet of Sorte. The remnants carried on to enjoy a magnificent view over Moena and a pleasant wooded descent alongside a raging torrent. The length of the walk was about four miles. 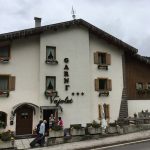 Wednesday 29th May 2019 trip to Venice by Hilary

This was the last day of our stay in Padua before flying back home the next day.  The group all made different choices as to how they wanted to plan their day. This proved very successful as in smaller groups we were all able to navigate crowds and visits particular places of interest.

Susan led a group of about eight Polyramblers to visit the main sites of Venice. I particularly enjoyed this trip as it had been over forty years since I had last visited this unique city.  We took a train and then a boat ride along the main canal, and under the Rialto Bridge.  As it was an overcast day it was not too crowded enabling us to see the many iconic sites and famous buildings. We paused at St Marks square and admired the magnificent cathedral before wandering through narrow walkways enjoying the unique shops and buildings before stopping for lunch at a traditional eatery.  We continued towards the boat stop to reach our next destination, the Murano Glass factory, where we hoped to see a glass blowing demonstration.  Somehow, en route we managed to lose sight of Gillian and Stuart who caught a stopping boat and unfortunately arrived too late for the demonstration. The rest of us enjoyed a fascinating display of the art of glass blowing and most of us could not resist the chance to buy some Murano glass afterwards.
We continued on our very relaxing stroll, heading towards the Jewish Ghetto quarters, one of the oldest and most historically interesting areas of Venice. We managed to lose sight of two more of our group on route!  Finally, we reached the Ghetto area; this part was designated a Jewish quarter from the 16th to 19th century. By day the Jewish merchants and Doctors were permitted to attend to Venice’s commercial interest, but at night and on Christian Holidays they were locked within the gated island of the Ghetto Nuovo. Many of the original buildings remain and there are plaques on the doors to remind people of the thousand of Jewish people who were sent to concentration camps in the war.  Following our trip to Venice we all joined up again to enjoy a final dinner at a great restaurant in Padua.

Many thanks to Susan for organising such a successful trip and ensuring that everyone reached the airport at the correct time the following day.